Mufulira Mine Disaster of 1970, Zambia

Mufulira Mine Disaster of 1970, Zambia

Figure 1: Sinkhole in the No.3 dam with the met site in the background (Norman Kenward - Independent Photographer)

On the 25th September 1970 an underground breach of a tailings dam occurred at the Mufulira Mine in Zambia. As the night shift crew were on duty the tailings dam above them collapsed causing nearly 1 million tonnes of tailings to fill the mine workings killing 89 miners. A sinkhole opened on the surface allowing surface water to continue to pour into the workings.

Two years prior to the disaster sink holes opened up (as a result of the underground hanging walls collapsing) within the No.3 tailings pond and a surface depression developed in the impoundment. There were also two cases of minor mud ingress into the mine a few months before the main failure. The management were reluctant to accept and investigate the potential impact of future sink holes. Finally, a sink hole opened connecting the underground workings and the tailings in the impoundment.

Work needed to be carried out on the No3. impoundment before the rainy season began in December. This gave the mine little over two months to carry out the essential work. Priority was given to prevent further infiltration of surface runoff and rainfall into the sinkhole and thus eroding more tailings:

The first step was to build a bund around the dam which would adequately protect the sinkhole. It took thirteen days to construct the bund and install the submersible pumps in the sinkhole to decant the ponded water.

Although the western part of the mine was unaffected by the inrush of tailings, the No.14 shaft was entirely used up for pumping of the eastern workings as a result of the water ingress. Ore had to be hoisted up the Prain shafts where it was screened on the surface and the undersize sent to the mill for processing. The production rate for a few months after the accident was 40,000 tonnes/month compared to 620,000 tonnes/month before the accident.

In October the mud clearing of the 500-level began and luckily the three shafts serving this level weren’t submerged from the inrush. The removal process started slowly, but once the mud began to dry out and became more stable it was easier to extract. Fortunately, throughout the ordeal the emergency arrangements for ventilation proved to be adequate for the entire mine during the ore and mud extraction.

A further problem came apparent when two pumps were being lowered down a shaft. During the lowering a submersible pump underground caused a power trip, which concurrently caused the lowering hoist to stop abruptly. One of the two pumps being lowered slipped out of the hoist and fell down the shaft and hit two operating pumps damaging them. The water level began to rise by 30cm (1ft) an hour as a result of the lost pumps causing problems.

The inrush rendered the most productive part of the mine inoperative. After the recovery of the mud only mining methods that support the hanging wall could be used. Under no circumstances could subsidence mining be resumed. As the thickness of the horizontal ore seam was up to 60m an adoption of post-filled transverse open stoping was applied. 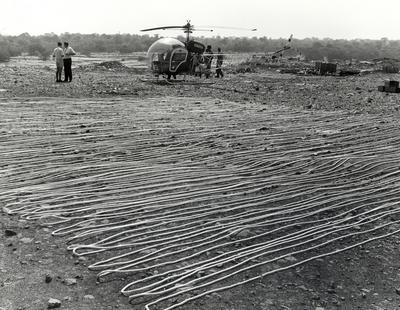 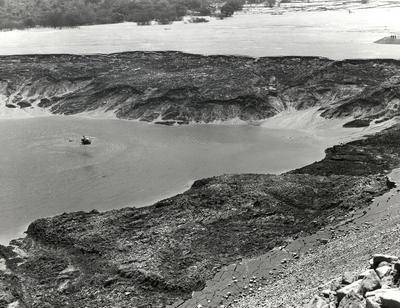