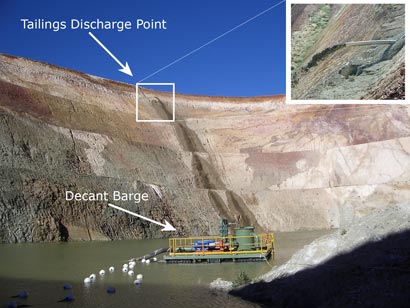 In-pit tailings storage, as the name suggests, is simply the process of backfilling abandoned open pit surface mines with tailings (figure 1). This method is very attractive to a mine operator as worked out voids can be filled at a fraction of the costs associated with designing, constructing and operating a conventional, thickened, paste or dry stack facility. Another advantage to in-pit storage is that the tailings do not require retaining walls, thus the risks associated with embankment instability are eliminated (EPA 1994).

Remote mining operations in Australia have used in-pit storage for decades where the groundwater is saline or non-potable. Also, the aboriginal stakeholders prefer voids to be filled after mining has ceased and grant permission to backfill suitably located pits.

The main disadvantage to in-pit storage of tailings is that the potential for groundwater contamination below and around the void can be very significant (DME 1999). However, some operations have installed underdrainage systems to control and recover seepage from the deposited tailings. Other disadvantages to in-pit storage are:

One operational consideration with in-pit filling is that the tailings can squeeze causing overtopping on the opposite side to the point of discharge when freeboard is low (towards termination of filling the pit). This occurs due to the weight of the tailings around the discharge point causing localised slumping that can create a surge of tailings to flow and produce overtopping of the ponded water (or tailings) at one side of the pit. This can be controlled by considering a high freeboard and drying time prior to further topping off if other abandoned in-pits or tailings storage facilities are available.

Due to the depth and generally high rate of rise of the tailings associated with in-pit disposal, the insitu density of the tailings can be low. Therefore, consolidation effects can be high and over prolonged durations compared to conventional surface impoundment disposal. This means that as the tailings consolidate, a depression forms over time more promenant in the areas of greatest depth within the open pit. This can be seen in figure 2 where a closed in-pit has produced a depression (left hand side of the figure) where the greatest depth of tailings exists. This high rate of consolidation over prolonged durations can make closure contouring difficult. 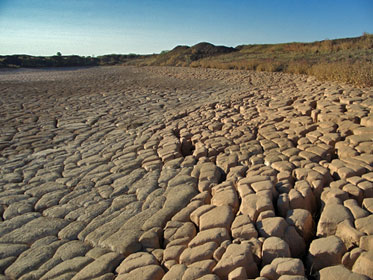 In this type of situation, and where the mine is still in operation, most pits are 'topped off' with tailings to fill the depression with fresh tailings, thus increasing storage capacity. Another alternative is to take advantage of the natural beach slope of the tailings and consider a riser technique. In this situation a pipeline is extended towards the center of the dried tailings depression with a 90 degree bend installed projecting the end of the pipe vertically. Tailings are discharged until a conical pile of tailings are formed within the boundaries of the open pit. As consolidation occurs, the conical shape is lost and the final depression of tailings is less, even after closure capping and contouring has been completed. If higher rates of thickening can be implemented using the riser, the conical pile is steeper allowing for higher storage volumes and further reduced final depression of the in-pit. Figure 3 shows the riser technique being implemented at a mine in the Northern Terrotories of Australia.

Figure 3: Topping off a in-pit facility using the riser technique (Courtesy of Newmont)